Insight on the News - World

In abreathless hatchet job, the left-wing Internet magazine Salon.com hasjoined a relentless campaign to vilify Iraqi Governing Council memberDr. Ahmed Chalabi, a favorite of neocons and many members ofCongress. In an article released on May 4, Salon writer John Dizardalleges that Chalabi made false promises to his U.S. supporters,delivered fake intelligence, and more recently worked behind the backof U.S. intelligence in Iraq to allow agents of the Islamic Republicof Iran to organize Iraqi Shiites against the U.S. occupation. 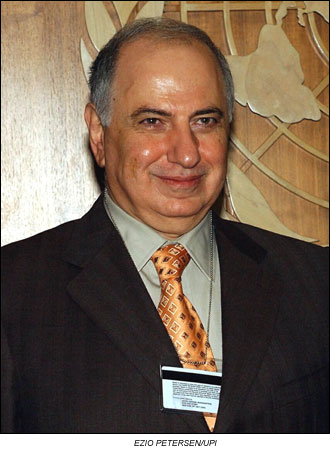 Theallegations would be devastating if they were true. But a key sourceDizard names in his article not only denies the quotes attributed tohim by Dizard, but claims in a letter sent last week to Salon the dayafter the article appeared that Dizard had misrepresented himself."Indeed, at no time did I ever consent to be interviewed by Mr.Dizhart [sic] for the article in question or any otherarticle," attorney L. Marc Zell writes. "None of the quotationsascribed to me was made by me and I categorically disavow each ofthem. I have never met with Mr. Ahmed Chalabi nor have I ever heldany discussions with him. I have no personal knowledge of his past orpresent dealings, other than what I myself read in the internationaland national press. Moreover, I have never met with a Mr. Dizhart,although I did speak by cell phone on a few occasions with a reporterfor the Financial Times by that name about doing business in Iraq."Dizhart (Dizard) never mentioned Salon or that he was profilingChalabi, Zell added.

Zell is not just any attorney; he is the law partner ofUndersecretary of Defense for Policy Doug Feith, a strong Chalabisupporter. Their law firm, Feith and Zell, has represented thegovernment of Turkey, and helped aerospace giant Loral Aerospaceconduct an internal security review in 1996, after several Loralengineers were accused by the company's own security board ofillegally transferring classified U.S. ballistic-missile technologyto Communist China.

Dizard pumped Zell's alleged comments as part of his assault onChalabi's credibility, honesty and reputation: "While Zell'sdisaffection with Chalabi has been a long time in the making, hisremarks to Salon represent his first public break with the would-beIraqi leader, and are likely to ripple throughout Washington in thedays to come." Instead, as Zell's disavowal of Dizard shows, the onlything that ought to be "rippling" through Washington is therevelation that a Salon.com reporter has been fabricating quotes, afiring offense for any reputable publication [see"The Crumblingof the Fourth Estate," postedMay 5].

But while Dizard may have attributed his own opinions to Zell,he also recycled a series of allegations against Chalabi that havebeen carefully planted by high-ranking officials at the CIA and theState Department during the last eight years as part of anorchestrated smear campaign aimed at destroying his credibility as apro-democracy leader in Iraq.

For years, high-ranking U.S. officials have been whispering toreporters that Chalabi was "unreliable." They claimed theintelligence his Iraqi National Congress (INC) operatives werebringing back from inside Saddam Hussein's regime was cooked, thedefectors he presented from inside Saddam's weapons establishmentswere fakes, and his claims to have found widespread support for apopular uprising against Saddam were unrealistic. Or so theysaid.

Before the coalition invasion of March 2003, both the CIA andthe State Department had placed all their bets on sparking a coupwithin Saddam's ruling Ba'ath Party. "One of the problems with acoup," former Pentagon adviser Richard Perle told Insight shortlybefore the war began last year, "is that it entails by definition agroup of people who are close to Saddam. If their motive for actingagainst Saddam is to assume the reins and carry out the samepolicies, then a coup would be a very bad thing indeed." And yet,that is the policy establishment liberals at both State and the CIAwere supporting.

The smear of record that State and the CIA have been pushingabout Chalabi for years alleges his involvement in running theill-fated Petra Bank in Jordan. "Chalabi is a convicted felon," theytell reporters, by way of explaining why the United States should notrely on him. The charge is true as far as it goes. But the wayChalabi became a convicted felon in a kangaroo court in Jordanclearly suggests that the embezzlement case mounted against him was athree-dollar bill.

The Petra Bank was closed by the Jordanian military in August1989 when Iraqi government agents - who included the former head ofJordan's military intelligence, now the premier, and the head ofJordan's Central Bank - ordered Jordanian tanks to surround the bank.Orders were given to freeze the bank's assets and jail its directors.Chalabi narrowly escaped arrest, fleeing the country in the car ofCrown Prince Hassan, King Hussein's younger brother. Hassan hasremained loyal to Chalabi ever since.

The Iraqis were worried that Chalabi had penetrated theiroverseas banking and procurement network, and wanted his operationsshut down once and for all. Adding to their paranoia, a U.S.government task force raided Iraq's top financial backer in theUnited States, the Atlanta branch of the Banca Nazionale del Lavorro,at virtually the same time.

Since 1992, when Chalabi was convicted in absentia in a statesecurity court in Jordan, he has continued to travel freely aroundthe world. Jordan never has asked for Chalabi's extradition fromBritain, the United States, Turkey or Saudi Arabia, through Interpolor through a government-to-government request.

In recent weeks, Chalabi has been trying to convince theJordanian authorities to turn over documents that would prove hisinnocence in the bank scandal and lay to rest the allegation ofcorruption, Insight has learned from a source close to the Iraqileader. "If they do not comply with this request, then Dr. Chalabiwill file a massive lawsuit against the government of Jordan fordefamation," said the source, who recently returned to Europe fromBaghdad.

But if the "convicted felon" slander has fallen flat, "seniorofficials at the Central Intelligence Agency" who have acknowledgedthey were hostile to Chalabi, tossed a series of new allegations to aNewsweek reporter last week. "U.S. officials say that electronicintercepts of discussions between Iranian leaders indicate thatChalabi and his entourage told Iranian contacts about Americanpolitical plans in Iraq," Newsweek revealed.

A Chalabi aide to whom this reporter read that passage simplyshrugged: "Of course he discussed America's political plans in Iraq!So was everybody else discussing it, starting with the New YorkTimes." According to one conveniently unnamed government source citedby Newsweek, some of the information Chalabi allegedly gave theIranians "could get people killed."

Kamran Makiya, an Iraqi intellectual who frequently has crossedswords with Chalabi, explained just weeks after the liberation lastyear why the State Department was thwarting efforts to establish anew governing council. "State wants to appease those people that theyhave long experience with," he told Insight at the time. "The natureof the State Department is to make people happy. I am not in thebusiness of making Arab governments happy. Nor should anyself-respecting Iraqi government be." The main State Department goal,he went on, was to ensure that whatever government emerged in Iraqafter the liberation would not "offend" or "challenge" Saudi Arabia,by setting a strong example of democratic self-government.

The State Department's current plan has transferred politicalauthority in Iraq from the Coalition Provisional Authority and PaulBremer to U.N. envoy Lakhdar Brahimi, an Algerian Sunni who wantsnothing to do with Chalabi or his supporters but is very close to theSaudi government. As several sources knowledgeable of the meetingtell Insight, the first thing Brahimi said when he met with theGoverning Council was that he came not just as a United Nationsenvoy, but as "a brother Arab."

As Qanbar puts it, "Brahimi does not want to see Ahmed Chalabior any of his supporters in the new Iraqi political establishment.Instead of de-Ba'athification, he wants de-Chalabization."

Kenneth R. Timmerman is a senior writer for InsightOnline.

Kenneth R. Timmerman is a seniorwriter for Insight and author of TheFrench Betrayal of America,just released from Crown Forum.