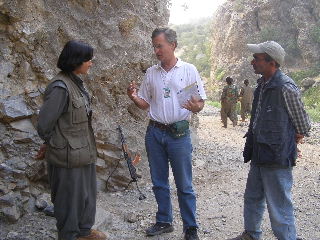 Qandil mountains, Iraq - Kurdish rebels based in the rugged mountains along Iraq’s northeastern border with Iran told Newsmax in exclusive interviews at secret guerilla bases that they have killed 200 Iranian Revolutionary Guards troops during clashes over the past two months.

Guerilla leaders of the Party of the Free Life of Kurdistan, PJAK, said they have clashed with Iranian forces 21 times during this time.

Iran has not admitted to the losses.

The intense fighting began on Aug. 16, when Iran and Turkey began jointly shelling villages inside Iraq where rebels from those countries have their bases.

Both Iran and Turkey are currently massing troops on their sides of the border with Iraq, in preparation for a ground and airborne assault on the rebel bases inside Iraq, according to published reports and information from local sources.

It took 30 minutes of difficult driving in an off-road vehicle for Newsmax and a Kurdish guide to reach the site of the first rebel camp, which is hidden on a hillside near the village of Marado in the flank of 10,000-foot mountains.

The area has been hit repeatedly during the recent Iranian shelling, and showed signs of freshly-burned fields and orchards.

During the most intense shelling, in August, many villagers abandoned their one-story mud and stone huts and camped in a hard-scrabble river valley 10 miles away.

The PJAK fighters appeared for the initial interview after walking two hours down steep, rocky paths from a mountain outpost overlooking Iran.

Biryar Gabar, 33, hails from Sardasht, Iran, and gave up a career as a chemical engineer in order to join the guerilla fighters. He rose through the ranks to become a member of the organization’s political bureau, its central decision-making body.

Although he squats to wash himself at a mountain spring and often sleeps outdoors, he talks knowingly of strategy and international events over a simple dinner of raw cucumbers, tomatoes, fried potatoes, and bread.

“It is not our goal to pick a fight with the Sepah Pasdaran,” the Iranian guerilla fighter said. But when provoked, PJAK will strike back hard “to make a strategic political statement.”

“More than 80 percent of the military activities of the Sepah in our area have targeted PJAK, because we are the only active opposition group inside Iran that is radically opposed to the regime,” he said.

PJAK is a grass-roots organization that has launched an intense recruitment drive inside Iran and among Kurds from Syria and Turkey.

The names of its leaders are not household names in the United States or Europe or in Iran. But interviews with over a dozen PJAK cadres during a two day visit to rebel bases in Iraq revealed mature leaders, who speak knowingly of the group’s ideology of political action, and dozens of young guerillas who have left their families behind to join the struggle for freedom.

PJAK has paid a price for its recent successes. More than 40 full-time party workers have been jailed in Iran, and several have been condemned to death, Gabar said.

Several hundred more volunteer workers and local recruits have also been arrested, and have been organizing political prisoners while in jail.

But the group’s willingness to stand up to the Pasdaran has won them respect inside Iran. “We have been averaging between 100 to 150 new recruits each month,” the Iranian guerilla leader said.

Female fighters serve tea after dinner at a long deal table beneath the trees against a backdrop of climbing green vines and spectacular mountain views.

When darkness falls, a fighter turns on an energy-saving light bulb dangling from a tree, using electricity generated from a small dam beneath the encampment. The sound of running water can be heard everywhere.

PJAK guerrillas see themselves as a “self-defense force.”

Unlike earlier Kurdish liberation groups in Iran or Turkey, their goal is not to wage a war of national liberation, but to combine political action with guerrilla operations aimed at defending Kurdish activists in Iran and retaliating against Pasdaran troops and others who are involved in specific acts of repression.

In the July 2005, for example, a Kurdish human rights activist was brutally murdered by regime agents and his body dragged through the streets of Mahabad behind a jeep.

The PJAK attacks were meant as a warning to the regime that such actions would no longer go unpunished, Gabar said.

Another example of this “self-defense” strategy occurred this past July, when an Iranian judge sentenced a captured PJAK political operative to hang.

PJAK guerillas located the judge and executed him in public in the middle of Sanandaj, the capital of Iranian Kurdistan.

In the most spectacular PJAK operation to date, guerillas downed an Iranian helicopter near the Iranian city of Piranshahr on Aug. 16, the first day of the Iranian assault, with sustained fire from a 7.62 mm BKC machine-gun.

The Russian-made BKC, also known as the PKMS, is commonly found mounted on the back of the pick-up trucks used by the Iraqi police and civil defense forces, and is available on the black market.

Five Iranian troops in the helicopter were killed in the crash, and PJAK guerillas killed another 20 Iranian soldiers on the ground. In a separate incident, they damaged a second helicopter, Biryar said.

PJAK fighters managed to retrieve documents and other items from around 60 of the Iranian dead, gaining vital intelligence on Iranian forces and their intentions, he added.

They learned more by interrogating an Iranian soldier captured during the fighting who they are holding as a prisoner of war.

Young guerilla fighters interviewed in a separate training camp a bone-jarring 40-minute drive away held a simple ceremony for three of their platoon who had been recently “martyred” during clashes with the Pasdaran. 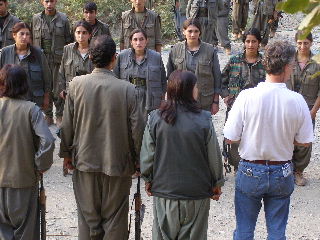 There were no prayers, no lengthy speeches, or exhortations, just the recitation of the names of the dead and a simple military salute. Half of the 50 to 60 fighters at this camp were women, and most were in their early 20s.

Arsham Kurdman, the leader of PJAK’s women’s movement, described a Sept. 10, 2007 attack against an Iranian military outpost in Shaho, during which 12 Iranian soldiers were killed.

“Many women were involved in this operation, which was coordinated by a female guerilla,” she said. PJAK suffered no casualties but seized the Iranians’ weapons and materiel as war booty.

“Fifteen of our members are now in Iranian prisons,” she said. The women’s movement has already had a dramatic impact on the attitude of Iranian women toward themselves and toward the future.

“Before, hundreds of women were immolating themselves, because they saw no hope for themselves in Iran,” she said.

“Now that has virtually stopped. Instead, those women are coming to us.”

Exploits such as these have given rise to a new mythology inside Iran, said Biryar Gabar.

“There is a new saying that one woman guerilla can crush 45 Pasdaran,” he said, twitching his black moustaches mischievously.

“Men in coffeehouses are saying, what strong women we have in the mountains, while we just sit here and talk.”

He said that several PJAK female fighters had fought “to the very end,” preferring to blow themselves up with their own hand grenades than face capture, torture, and execution.